It’s been a hectic couple of weeks. Recovering from my hip surgery has been relatively easy but, as I wrote in my last post, I missed cooking since I was on crutches the whole time. We ordered out for dinner every night and we ended up getting tired of it pretty quickly. Last weekend, we decided that we would venture back into the kitchen together and make something. Steve would do most of the work and I would do as much of the prep work as my crutches would allow.

I was craving something sweet and comforting. Something that felt familiar and nourishing. We went with an apple cake. 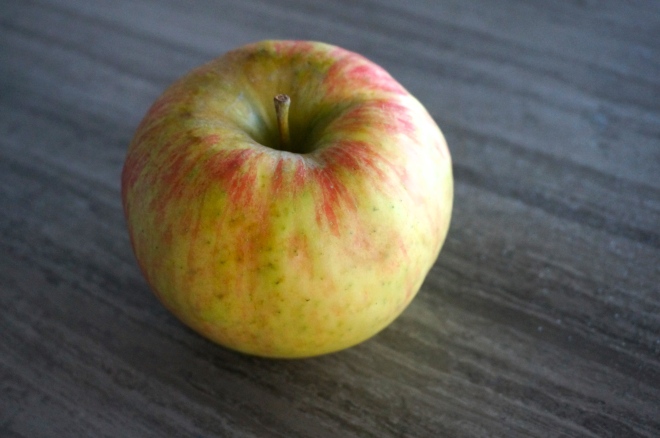 My mom always made two kinds of apple cake when I was a kid: a bundt cake with chunks of apple inside and an upside down apple cake. I don’t actually have either of the recipes that my mom used to use, but a few weeks ago, the incomparable Deb Perelman of Smitten Kitchen posted a recipe for an apple cake that her mom always made. We thought we’d give it a try.

In many ways, it’s a pretty traditional apple cake. But there’s one little twist. The apples are added in two sections, one between the two layers of batter and one on top of the batter. This way, when the cake finishes, its top is studded with golden brown apple pieces, making it beautiful, as well as delicious. 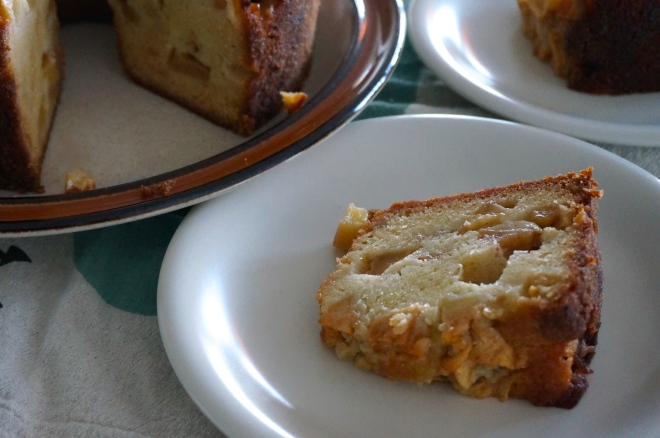 Preheat oven to 350º F. Grease and flour a tube pan. Peel, core and chop apples into chunks. Toss with cinnamon and sugar and set aside.

Whisk together flour, baking powder and salt in a large mixing bowl. In a separate bowl, whisk together oil, orange juice, sugar, vanilla, and eggs. Add dry ingredients to the egg mixture and stir with spatula just until combined. Don’t overmix.

Pour half of batter into prepared pan. Spread half of apples over it. Pour the remaining batter over the apples and arrange the remaining apples on top. Bake for about 1 1/2 hours, or until a tester comes out clean. Cool completely before running knife between cake and pan, and unmolding onto a platter.