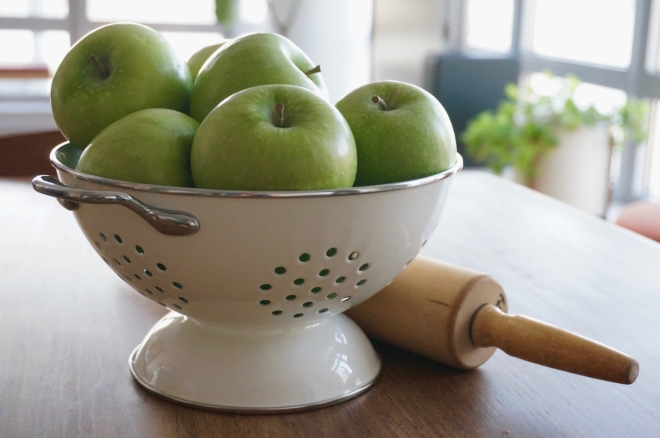 I realized my mistake as soon as I opened the Fresh Direct box. This year, we were going to spend Thanksgiving at home for the first time in seven years. Our friend JR was coming to join us for dinner, so I was going to keep the Thanksgiving meal a little smaller than usual. Instead of making two desserts, I figured that one would be enough. I opted for apple pie. I went online the week before and ordered everything I needed, including seven Granny Smith apples that would go into the pie.

Staring at me now, nestled next to each other inside the Fresh Direct box, were seven plastic clamshell containers, each holding four perfect, green, Granny Smith apples. I had ordered seven 4-packs of apples, giving me 28 apples. At least this time it wasn’t 28 pounds of pork. Eight of them went into the apple pie and the rest will be eaten or turned into apple sauce soon. 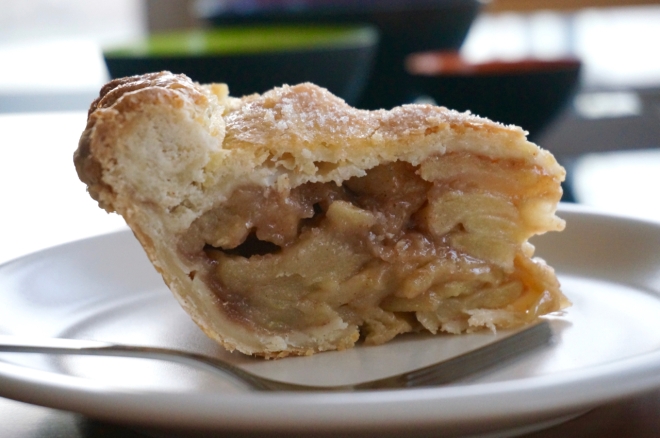 I am prone to hyperbole when it comes to food, but I can honestly say this apple pie was the best I have ever made and possibly the best I have ever eaten. And so you don’t think it’s just self-delusional boasting, both Steve and JR said the same thing once they tasted it. I tried this recipe from the last issue of Bon Appétit, which calls for roasting the apple slices first, in order to remove some of their moisture, before combining them with brown sugar and butter for the pie filling. When I say butter, I mean a lot of butter. The entire pie uses almost two packets of butter. But it’s worth it. Every slice came out perfect, with no liquid drowning the pie plate. The apple filling stayed in place between the layers of buttery crust. The taste was quintessential apple pie: sweet, a little tart, with a hint of cinnamon.

Note: The pie crust recipe and method I give you here is my own variation on a recipe by Cook’s Illustrated. The vodka helps reduce the amount of gluten in the dough, keeping it tender. The rest period in the fridge is essential. A minimum of two hours, though one or two days is ideal.

For the pie filling:

In a large bowl, whisk together the flour, salt, and sugar. Using the large teardrop holes of a grater, grate the butter into the flour one stick at a time. After each stick, use your hands to gently mix the flour and butter a little. Pour cold vodka and water in the bowl and using a fork, start mixing everything. Switch to using your hands once all the liquid has been absorbed and mix until the dough just comes together. Turn out onto a lightly floured surface and press together and flatten dough a few times until it just holds its shape but still feels a little crumbly on the edges. Split in half and shape into 1-inch thick disks. Wrap in plastic and chill at least two hours but preferable 24-48 hours.

Let dough sit at room temperature to soften slightly, about 5 minutes. Roll out 1 disk on a lightly floured surface to a 13″ round. Transfer to a 9″ pie dish. Lift up edges; let dough slump down into dish. Trim, leaving ½” overhang. Roll out remaining disk. Scrape apples into dish and place dough over top; trim, leaving 1″ overhang. Fold edge of top crust under bottom crust, press together to seal, and crimp. Cut 8 slits in top to vent, brush with egg, and sprinkle with remaining 2 Tbsp. granulated sugar. Chill pie in refrigerator until crust is firm, about 30-45 minutes.

Preheat oven to 400°. Place pie on a parchment-lined rimmed baking sheet; bake 30 minutes (crust should be slightly golden). Reduce oven temperature to 350° and continue baking until juices are bubbling and crust is deep golden brown, 50–60 minutes. Transfer to a wire rack; let cool at least 4 hours before slicing.