This week we are on vacation in Italy with a group of friends. We rented a house in Tuscany and are living the country life, Italian style. I wish I could report many amazing meals, but in our three days here we’ve had only two good meals. One was cooked by the Italian cook who cooks for the house we rented and the other one was at a restaurant in Siena. The others have been so-so to downright bland. But we have several days to go so hopefully our luck will improve.

No recipe today either. Instead, I have harissa. Harissa is a condiment commonly seen in North African countries like Tunisia, Algeria, and Morocco. It’s usually a mixture of peppers (almost always hot), garlic, spices, and oil, ground into a paste. I’ve tried several brands of harissa, especially in France, where moroccan and tunisian food is very common. They all tended to be thick pastes with concentrated, pungent flavor. It wasn’t until I happened to find Mina harissa in New York, however, that I found one I absolutely loved. 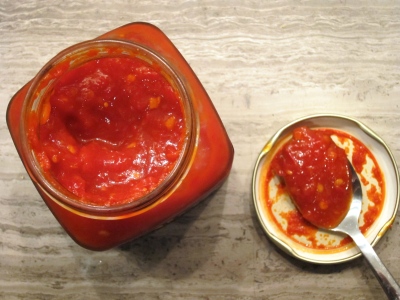 Unlike much of the other harissas I tried, which were canned or available in a tube, this one is in a jar and can be refrigerated for a long time once opened. It’s not too spicy (there’s even a sweet version) and it tastes of fresh peppers and garlic. Its bright red color is matched by its bright flavor. We love it on its own or mixed with some olive oil and lemon juice to create a spicy dressing for meat or fish. I’ve also mixed a teaspoon of it with a tablespoon of softened butter and put a pat of that on top of steaks. 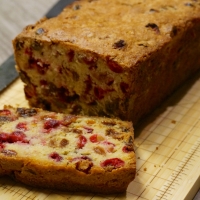 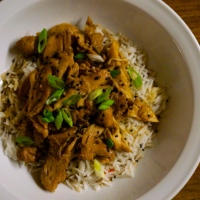