Last weekend, I was sitting next to our friends’ adorable six-year old daughter, eating breakfast, when she turned to me and asked:

– Why don’t you and Steve have kids?

The question stopped me in my tracks. I mean, how do you tell a six-year old that growing up you always thought you’d have kids, you always assumed you would, but then you hit your 20s and boom! this life changing event happened – you came out? How do you explain to her that at that point you thought, ok, this settles it, I’m not going to be able to have kids, and you kind of came to terms with that but then the years passed and you saw more and more same-sex couples actually doing it, actually having kids of their own, and you thought maybe that will be me?

How do you tell her that for many years you were still finding your way, still looking for a partner in life, so kids were not in your plans, and then you met a man, a wonderful man, who would turn out to be the love of your life, your future husband? How do you describe how much fun you were having together and how the years started adding up one at a time until you both realized there was a deadline coming, to make a decision on having kids, and that the deadline came and you talked and you realized that you just loved your life together too much and you were too old by then, too satisfied with the way things were, too content with everything to disrupt it with the addition of a kid? 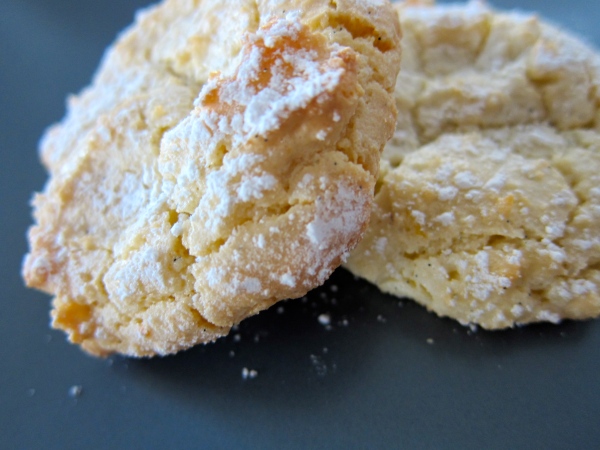 How do you explain to this inquisitive, smart, and beautiful six-year old girl that it was a tough decision, a really tough decision, and that there are days when you are going to work and you see a blond-headed toddler who looks so much like Steve did in all the photographs from when he was little, and the little boy waves at you and your heart skips a beat? How do you describe the wistful feeling you have when you imagine a little version of Steve running around, but then the toddler starts to cry and scream and you see the parent scramble and try to find a way to make him happy, and you think yes, that’s right, it’s a sacrifice and a commitment for life and you weren’t ready to make either, and that is ok? 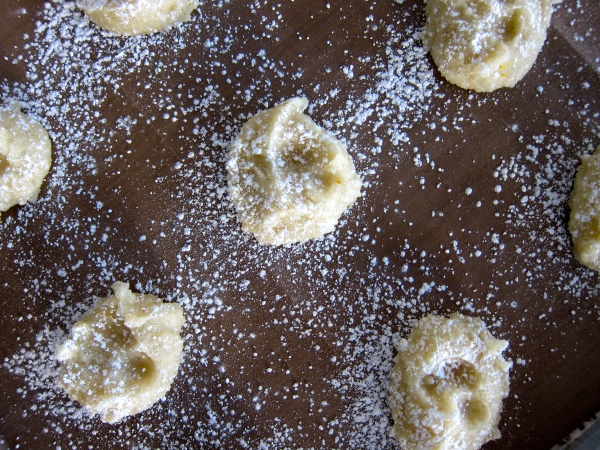 Well, you don’t tell her any of these things. And I didn’t. I just smiled and told her simply that Steve and I had decided that we wouldn’t have our own kids and that we were instead really happy that we had so many friends in our lives with kids, just like her own dads and her and her brother.

As we both went back to our breakfasts, I thought of that alternate universe where our lives had taken a different path, one which included a little boy of our own, and how as soon as he was able to do so, I would bring him in the kitchen and show him how to help me make these vanilla almond orange cloud cookies, and how  much fun we’d both have making them and eating them. But then, someone asked me a question about one thing or another and the conversation shifted and the day took its own course. 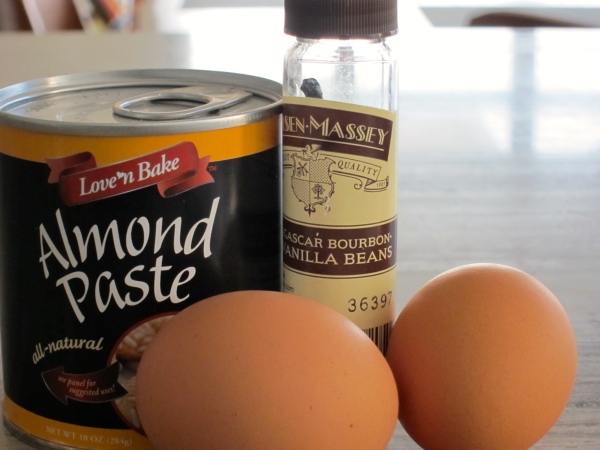 Place two racks in the center and upper third of the oven and preheat oven to 325º  F. Line two baking sheets with parchment paper and set aside.

In a small bowl, mix together granulated sugar, orange zest, and scraped vanilla seeds. Use your fingers to works the zest and vanilla into the sugar, creating a fragrant, moist sugar.

Place sugar in the bowl of an electric stand mixer fitted with a paddle attachment. Add the almond paste. Beat on medium speed creating a crumbly sugar and almond mixture.

While almond mixture is combining in the mixer, place two egg whites in a small bowl. Whisk with a fork until loose and frothy. This will help in pouring the egg whites into the mixer. With the mixer on medium speed, gradually pour the egg whites in to the crumbly almond and sugar mixture. Beat until a smooth paste is formed.

Spoon or scoop batter by the heaping tablespoonful onto the prepared baking sheet. Sprinkle generously with powdered sugar. Using the tips of three of your fingers, make indentations in each cookie.

Bake cookies for 20 to 25 minutes or until cookies are lightly browned on top. Remove from the oven and allow to cool on the pan. Store cookies in an airtight container at room temperature for up to 5 days.