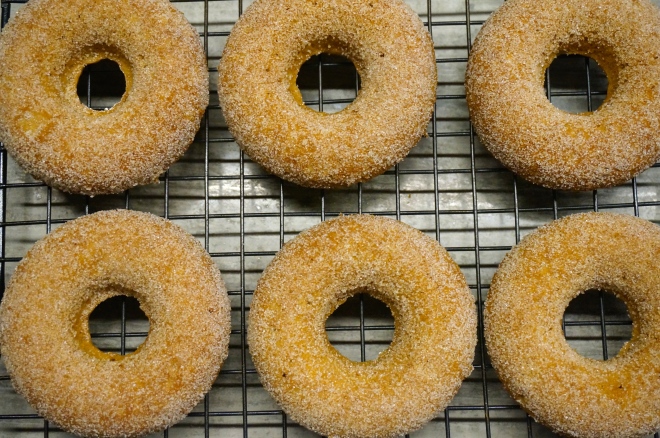 I didn’t grow up with school-provided lunches or even school cafeterias where students sit down to eat. In all grades, school ended around 1:30pm and we all went home for lunch. There was a food vendor in the school that worked out of a small room with no tables and with one single window from which we could order sodas and sandwiches if we wanted them during class breaks.

However, I remember that for a little while when I was in elementary school, we would get a school provided mid-morning snack. I was going to an elementary school that a lot of refugee children attended (from the 1974 war in Cyprus), so the government was providing some food to those schools. It consisted of a giant pot filled with sweetened condensed milk that had been thinned with water to the consistency of regular milk and heated over a gas flame until it was almost boiling. We all brought our own mugs and a teacher would stand next to the steaming pot with a big ladle and fill our mugs with the sweet drink. Sometimes we could even get seconds.

But even better was what came with it. A plump donut, often filled with jelly, and covered in white sugar crystals. The combination of the sweet milk and even sweeter donut was what I looked forward to the most at school every day. Now that I think about it, it must have been a terrible idea to give a bunch of elementary school kids a giant sugar spike in the middle of the morning, expecting them to sit quietly in class afterwards.

Today’s recipe is for a different kind of donut. They are cake donuts that are baked, not fried. They are also made partly with whole wheat flour so they are a little more healthy than your regular fried donut. Nevertheless, they pack a ton of flavor from the apple sauce and boiled cider, as well as the maple sugar and cinnamon. They won’t give you the sugar high I probably got back in elementary school, but they will definitely hit the spot. 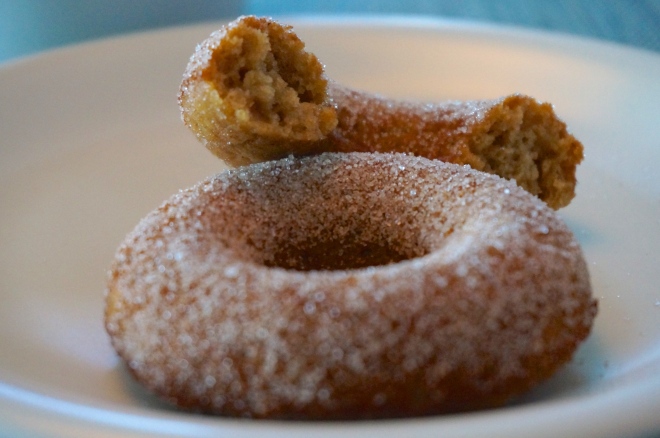 Preheat the oven to 350°F. Lightly grease two standard doughnut pans. If you don’t have doughnut pans, you can bake these in a standard muffin tin; they just won’t be doughnuts.

Add the flours, stirring with a spatula just until smooth. Do not overmix.

Fill the wells of the doughnut pans nearly to the rim; use about 1/4 cup of batter in each well. If you’re making muffins, fill each well about 3/4 full; the recipe makes about 15, so you’ll need to bake in two batches (unless you have two muffin pans).

Bake the doughnuts for 15 to 18 minutes, or until a cake tester inserted into the center of one comes out clean. If you’re making muffins, they’ll need to bake for 20 to 23 minutes.

Remove the doughnuts from the oven, and loosen their edges. After about 5 minutes, transfer them to a rack.

In a medium bowl, mix the 2 tablespoons of cinnamon and 1/2 cup sugar. While the doughnuts are still warm (but no longer fragile), gently toss them in the cinnamon-sugar. If you’ve made muffins, sprinkle their tops with cinnamon-sugar. 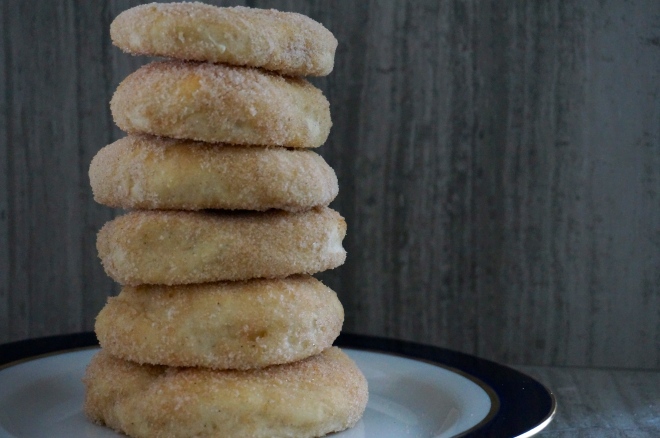 The night before I joined the army, the aliens came.

I’m not sure why my parents thought that it was a good idea to spend the eve of my enlistment eating dinner at a restaurant. Perhaps they thought it would be a good distraction. God knows we all needed one. But there we were, sitting al fresco on a hot summer night, eating roast lamb and whatever else my dad had ordered, when I saw them. 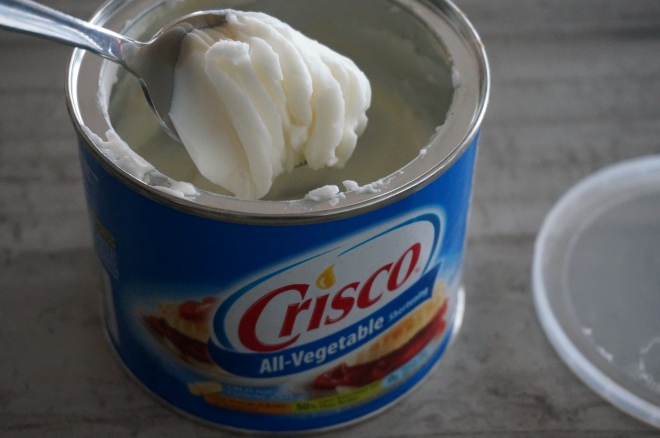 “What is that?” I said, pointing at the row of lights that twinkled in the hazy air, hovering high above, somewhere far from where we were sitting. Everyone looked up. We immediately started to guess their nature and it wasn’t long before the UFO possibility came up. This was the 80s and I was a 17-year-old that had grown up with Carl Sagan’s voice describing the “billions and billions of stars out there” and who had read and worshiped Isaac Asimov and Arthur C. Clarke. It seemed entirely possible to me that what we were seeing was actually a circle of lights viewed from the side, like a great big shiny doughnut resting on the dark canvas of the sky. 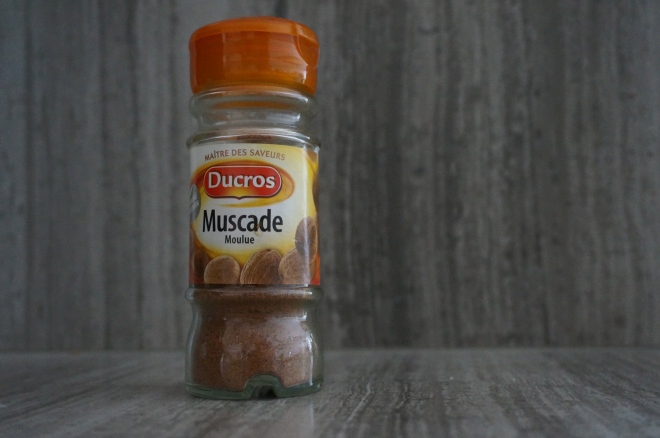 The lights became the only topic of conversation for my family and soon other tables at the restaurant noticed them and started to point up at the sky, some laughing nervously. My dad asked the waiter if he knew what they were but he said that he had no idea and that he was sure he had never seen those lights before. This was important. The lights were new. The UFO explanation had gained support. 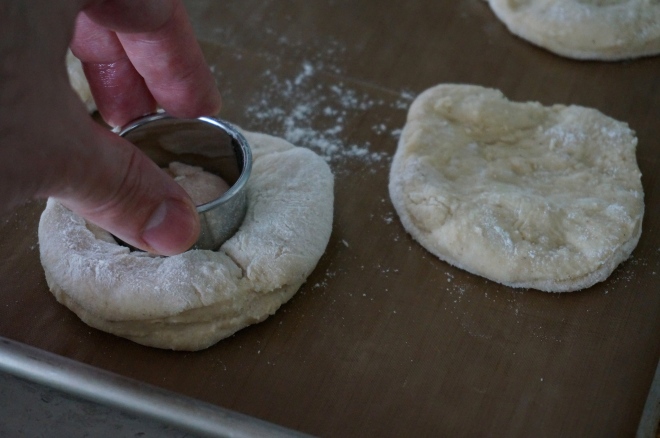 After dinner, as we were driving back home I kept looking out of the car window at those lights that still hung in the sky, hoping that yes, indeed, they were an alien ship, and that when the morning came, the world would change forever. And maybe this thing that I had feared since I could remember; the menacing rhinoceros that had been charging towards me from the moment I was first told that all boys like me would have to join the army when they finished high school; this experience that, based on the stories I had heard repeatedly from every adult man in my life including my dad, was going to be hard, traumatic, and painful; maybe, just maybe, becoming a soldier simply wouldn’t happen for me. 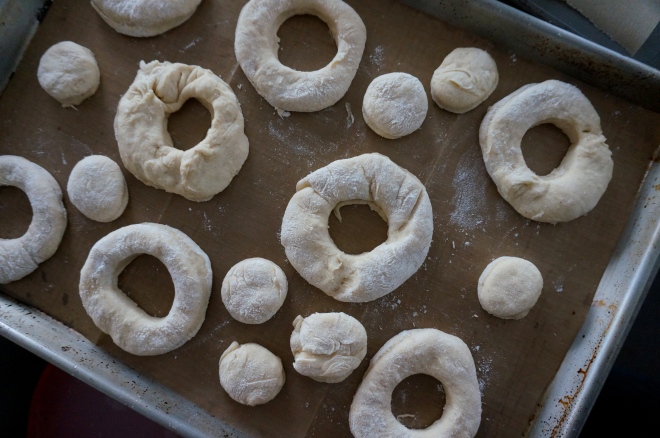 But when the morning came, there was nothing in the news, nothing in the paper, and as we all got ready for the long drive to the camp, where I would say goodbye to my parents and sister, all of them putting on a brave face for me, saving their tears for the drive back home, we never mentioned the bright lights in the sky.

It wasn’t until weeks later, after basic training was over and I was allowed a day long leave, when I asked my dad if he ever found out what those lights were. “Oh, it turned out to be a new restaurant that opened up on the mountains,” he said. “I guess it was such a clear night, we could see its lights all the way down here.”

By then it didn’t matter. My two-year military adventure had begun and I had discovered that, like just about everything in life, I could learn how to survive it. Without the help of aliens. 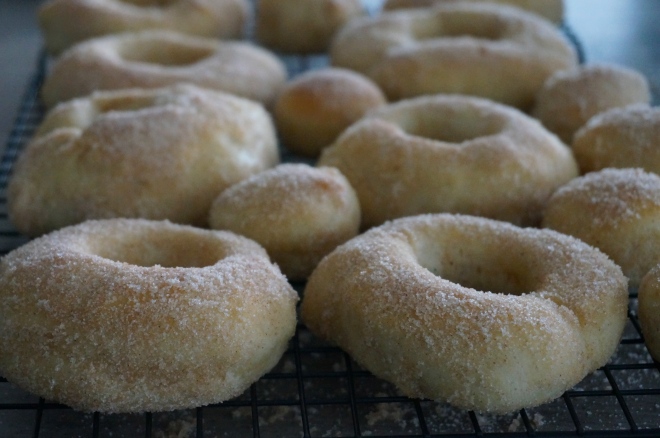 Note: These doughnuts are incredibly delicious, even though they are baked and not fried. They are tender and really flavorful. Don’t skimp on the nutmeg. I know it seems like a lot but in the end, you can taste it just enough to give them an unmistakable doughnut-y flavor.

In a small saucepan, heat the milk, water, and shortening until the shortening is melted. Let it cool to look warm (around 105 degrees F).

In a large mixing bowl, add the yeast, the 1/4 cup of sugar, salt, nutmeg, eggs, 2 cups of the flour, and the lukewarm milk mixture. Beat until well blended. Add the remaining 2 1/2 cups of flour and mix until smooth. The dough will be very wet and sticky. Cover the bowl and let it double in volume for about 1 hour.

When the dough has finished rising, scrape it onto a board or countertop that is very generously dusted with flour. Dust a little flour on top of the dough and flour your hands. Using your fingertips, pat the dough out into a circle or rectangle that is about 1/2 inch thick.

Use a 3 1/2″ round cookie cutter and cut out doughnuts, placing them on the prepared baking sheets. Using a 1 1/2″ round cookie cutter, cut out doughnut holes from the middle of the doughnuts, placing them also on the prepared baking sheets. The donuts rise but they don’t spread so you only need to leave about an inch between them. Continue until you have used up the dough. There will be lots of scraps of dough that remain. I like to gather them and roll them into long flat strips that I twist and place on the baking sheets as well.

Let the doughnuts rest and rise for 20 minutes, uncovered.

Bake the first baking sheet for 10 minutes (you can leave the second sheet to rise for an extra 10 minutes while the first is baking), until the donuts are turning slightly golden brown on top. Remove from the oven and immediately brush them generously with the melted butter. Rolle brushed doughnuts in the cinnamon sugar.

Doughnuts are great served warm but they will keep covered for a couple of days. They also freeze really well. 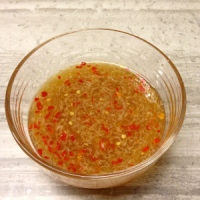 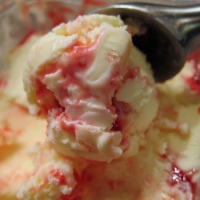 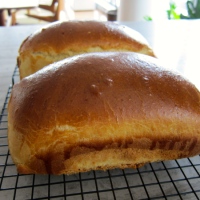 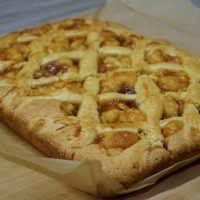 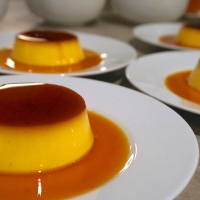 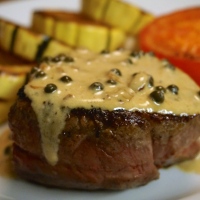