I didn’t grow up with school-provided lunches or even school cafeterias where students sit down to eat. In all grades, school ended around 1:30pm and we all went home for lunch. There was a food vendor in the school that worked out of a small room with no tables and with one single window from which we could order sodas and sandwiches if we wanted them during class breaks.

However, I remember that for a little while when I was in elementary school, we would get a school provided mid-morning snack. I was going to an elementary school that a lot of refugee children attended (from the 1974 war in Cyprus), so the government was providing some food to those schools. It consisted of a giant pot filled with sweetened condensed milk that had been thinned with water to the consistency of regular milk and heated over a gas flame until it was almost boiling. We all brought our own mugs and a teacher would stand next to the steaming pot with a big ladle and fill our mugs with the sweet drink. Sometimes we could even get seconds.

But even better was what came with it. A plump donut, often filled with jelly, and covered in white sugar crystals. The combination of the sweet milk and even sweeter donut was what I looked forward to the most at school every day. Now that I think about it, it must have been a terrible idea to give a bunch of elementary school kids a giant sugar spike in the middle of the morning, expecting them to sit quietly in class afterwards.

Today’s recipe is for a different kind of donut. They are cake donuts that are baked, not fried. They are also made partly with whole wheat flour so they are a little more healthy than your regular fried donut. Nevertheless, they pack a ton of flavor from the apple sauce and boiled cider, as well as the maple sugar and cinnamon. They won’t give you the sugar high I probably got back in elementary school, but they will definitely hit the spot.

Preheat the oven to 350°F. Lightly grease two standard doughnut pans. If you don’t have doughnut pans, you can bake these in a standard muffin tin; they just won’t be doughnuts.

Add the flours, stirring with a spatula just until smooth. Do not overmix.

Fill the wells of the doughnut pans nearly to the rim; use about 1/4 cup of batter in each well. If you’re making muffins, fill each well about 3/4 full; the recipe makes about 15, so you’ll need to bake in two batches (unless you have two muffin pans).

Bake the doughnuts for 15 to 18 minutes, or until a cake tester inserted into the center of one comes out clean. If you’re making muffins, they’ll need to bake for 20 to 23 minutes.

Remove the doughnuts from the oven, and loosen their edges. After about 5 minutes, transfer them to a rack.

In a medium bowl, mix the 2 tablespoons of cinnamon and 1/2 cup sugar. While the doughnuts are still warm (but no longer fragile), gently toss them in the cinnamon-sugar. If you’ve made muffins, sprinkle their tops with cinnamon-sugar.

Happy new year everyone. I took some time off from the blog during the holidays because I was traveling quite a lot and wasn’t really up to writing up stories and recipes while packing and unpacking my suitcase.

The last three weeks included six different flights, two continents, three countries, and a lot of eating. One of those flights was probably the scariest one I’ve had so far. We were flying from Athens to Paris when the captain came on to tell us there was some turbulence over the Alps, “nothing major,” he said. Five minutes later, the plane is swaying left and right, up and down, like a leaf caught in a windstorm. My hands sweated so much from my anxiety, that the iPad I had been gripping was crusted over with salt from dried sweat. 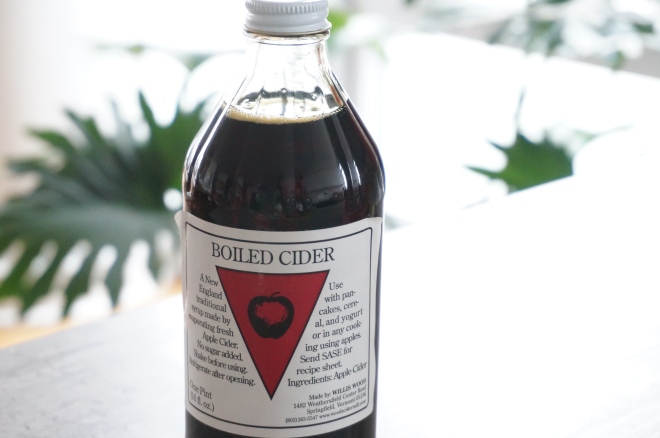 But there were also fun times and good food. There were the Christmas coffee cakes that Steve’s sister (and their mom before her) always makes. They are variations on Kulich, a yeasted sweet bread, studded with raisins and topped with a sugar glaze and colorful decorative sugar. Sliced, toasted, and slathered with butter, they make the perfect holiday breakfast. There were also tons of chocolates from Puyricard that we ate with our friends in Pressac, France, where we spent 6 days living in a house in the middle of a small farm with nothing around it but fields and animals. We celebrated New Year’s eve there, during which we ate fresh oysters, foie gras, and roast veal and cauliflower. The following week, in Cyprus, I had kolokotes for breakfast, traditional pumpkin turnovers that are filled with sweet pumpkin, raisins, and bulgur wheat. And my mom made koupepia, stuffed grape leaves. They were so good, I had them for three meals in a row. And I got to eat loukoumades, traditional fried dough balls that are soaked in honey syrup. 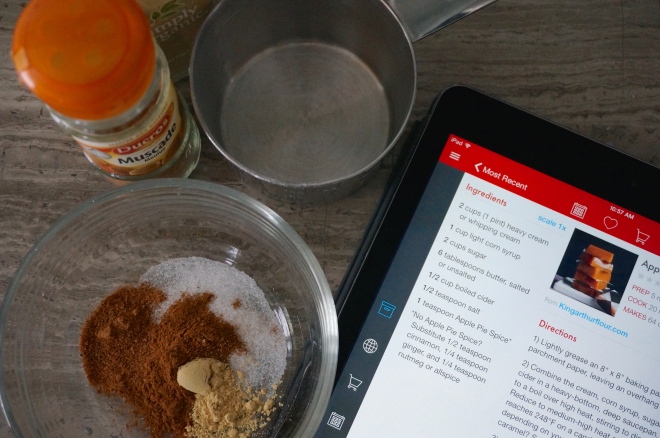 Now I’m back and getting ready for the next 2-3 months of cold weather and meager offerings at the market and the stores. This is the season for making things that have no season, using ingredients that are either available year-round or are preserved from the spring or summer. It’s also a good time to discover something new, that maybe you’ve never used before. Like this boiled cider that I bought from King Arthur Flour and which I’ve used in everything from oatmeal to quick breads to salad dressings, and these amazing caramels that I took with us on our trips over the holidays (Steve’s family loved them. Our French friends were not as thrilled with them, given their dislike for cinnamon in desserts). The boiled cider has the viscosity of maple syrup and is wonderfully sweet and tangy. The caramels I made with it are soft and slightly chewy, with a distinct apple flavor, sort of like a caramel apple, but smaller and less messy. 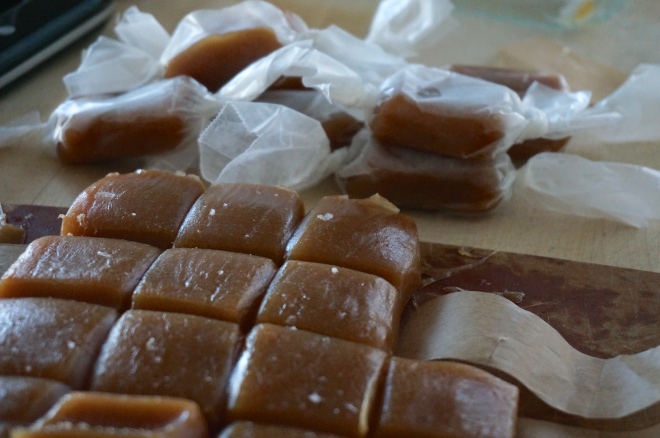 Lightly grease an 8″ x 8″ baking pan and line with parchment paper, leaving an overhang on opposite sides.

Combine the cream, corn syrup, sugar, butter, and boiled cider in a heavy-bottom, deep saucepan. Bring the mixture to a boil over high heat, stirring to dissolve the sugar. Reduce to medium-high heat and cook, without stirring, until the mixture reaches 244°F-245°F on a candy thermometer, 20 to 30 minutes, depending on your particular stove. (If you prefer hard caramels, boil to 248°F.)

Remove the pan from the heat; stir in the salt and spices.

Pour the hot mixture into the prepared pan. Let it cool completely. If you’re making soft caramels, put pan in the fridge for 20-25 minutes before cutting into 1″ squares. If you are making hard caramels, you can cut them without refrigerating them first.

Wrap caramels in parchment paper or wax paper. Place one caramel in the center of each square; wrap the opposite edges of the paper around the caramel and twist the exposed edges to close.