Beginning in July, my job changed and became a lot more time consuming. As a result, my cooking and baking has gone down quite a lot. All I can say is thank god for the amazing food delivery options we have in New York city. In order to still eat some home-cooked meals, I’m on the lookout for recipes that are quick and don’t require a lot of energy, because even if I have time at the end of the time, I am often too tired to prepare a more elaborate dinner. 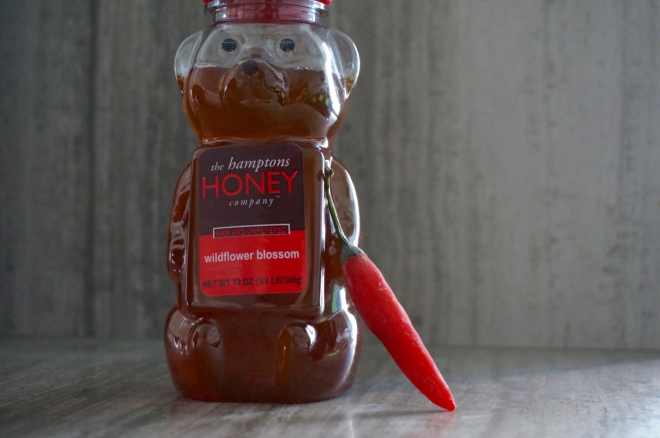 This is one of those recipes. You can prepare it in less than 10 minutes and it takes no more than 5 minutes in the oven before it’s ready to eat. The shrimp comes out juicy and incredibly fragrant from the combination of honey, chili, ginger, garlic, and lime. It’s spicy (and you can adjust the spice level to your taste) and sweet, which kind of makes it irresistible. It’s perfect with rice (which we now eat much more often since we bought this rice cooker and wonder how we ever lived without it) and perhaps a side of pickled vegetables (like these pickled carrots or pickled watermelon rind), whose acidity complements the shrimp flavors well.

Spread shrimp on a large rimmed baking sheet. Roast until shrimp is pink and opaque, but before the edges have started to curl, about 5 minutes. Sprinkle generously with fresh lime juice and toss with chives or scallions. Serve with rice. 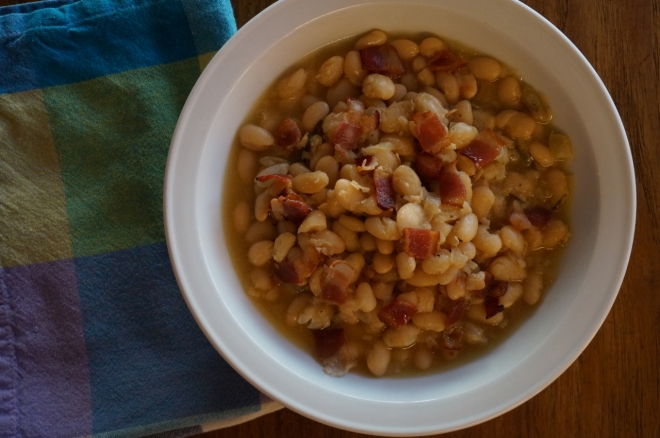 White beans are one of my favorite things to eat. Whether they are Cannellini or Navy or Great Northern, I love them all. Up to now, I’ve always made them the simple way my mom always has. I soak them overnight and then boil them gently in water, adding carrot and potato chunks during the last 20 minutes of cooking. Steve and I have always loved eating big bowlfuls of them, generously drizzled with olive oil and with ample amounts of freshly squeezed lemon juice. We both love the broth that the beans make when they cook, as it mixes with the olive oil, lemon juice and salt in our bowls. We always drink it all up after finishing our beans. When I told my mom, who always serves the cooked beans drained from their broth, that we love to drink it she was surprised. “But it smells like farts!” she said with a disgust in her voice.

But now I have a new favorite way to cook beans: baking them in beer. I’ve had this recipe for beer-baked beans bookmarked for a long time but I didn’t get around to trying it out until a couple of weeks ago. The beans cook in the oven in a covered pot, along with onions and garlic that have been sautéed in bacon fat, some rosemary, mustard, and honey. The result is a pot of beans that are cooked beautifully and with amazing complexity in flavor. There’s the bacon fat of course, which adds saltiness and plenty of umami, but also the mustard and honey that counterbalance each other (much like in honey mustard), and the rosemary to give it an herbal kick. Topping the bowl of beans with the crisp pieces of bacon that were used to render the bacon fat for the onions and garlic is the final touch that rounds everything out in both flavor and texture. And this bean broth is irresistible (it definitely smells nothing like farts mom!), the result of beer, chicken stock, and bacon coming together.

Preheat oven to 350º F. In a large Dutch oven or heavy pot with a tight-fitting lid, cook bacon over medium heat until fat is rendered and bacon is crisp and browned, stirring occasionally, about 5 minutes. With a slotted spoon, transfer bacon to paper towels to drain. Increase heat to medium-high; add onion and garlic to pot and cook, stirring occasionally, until onion is translucent, about 4 minutes. Add mustard and honey; stir and cook 1 minute. Add rosemary, beans, beer, and broth; season with salt and pepper. Bring mixture to a boil; cover and transfer to oven.

Bake until beans are tender and most of liquid is absorbed, about 1½-2 hours. Season to taste with vinegar, salt, and pepper. To serve, stir in reserved cooked bacon.

Surprises aren’t always welcome. And I’m not just talking about bad ones (Surprise! Your appendix burst!). Sometimes even good surprises can be unpleasant. When I was in 7th grade, some of my classmates and I organized a surprise birthday party for a boy who was at the time my best friend. We went to his house while he was away and anxiously waited for him to arrive. When his parents (who were working with us for the surprise) brought him in the door, we yelled “Surprise!“, at which point he immediately burst into tears and ran off. It took his parents 3o minutes to calm him down and bring him back to the party, which ended up being a lot of fun.

I never understood why he reacted that way until four years later, my parents announced to my sister and me that we were going out to dinner. When we got to the restaurant and opened the door, about 50 of our friends from school were there yelling “Surprise!” They had organized the party for both of our birthdays (which are four days apart) with the help of our parents. This was such a wonderful thing that our friends and parents did, but my immediate reaction was to want to turn around and run away. It was too much for me, the unexpected obligation to be at this party, to adjust from a quiet dinner out with my family to a night of dancing with my friends. I got over it after a few minutes, but I finally understood why my 7th grade friend had run away like that when we surprised him.

In food, good surprises are always welcome. In fact, I long for them. Bad surprises are never good (Surprise! That was a glass shard you just chewed on!). But an unexpected ingredient or an unknown cooking technique, they make me deliriously happy.

Granola isn’t known for its ability to surprise. But when I made this recipe and we tasted it for the first time, we pursed our lips and nodded in satisfaction. It was unexpected. The fennel and honey combined to make a truly unique flavor, at least for granola. We were surprised. Pleasantly. And we didn’t run away. We dug in for seconds. 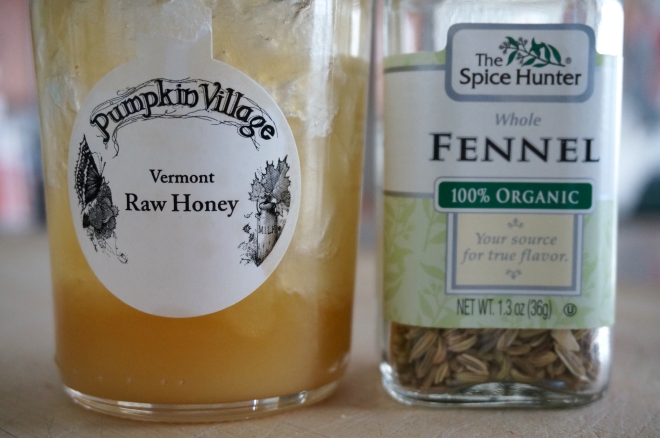 Meanwhile, whisk honey, peanut butter, oil, orange zest and juice, and vanilla in a medium bowl until smooth. Toss nuts and seeds, oats, and salt in a large bowl. Pour honey mixture over and gently mix until oat mixture is completely coated.

Spread out on a parchment-lined rimmed baking sheet and bake, stirring halfway through (edges will take on color before center does), until golden brown, 20–25 minutes. Let cool; granola will crisp as it cools. Break up into pieces, then stir in apricots and cranberries.

Do Ahead: Granola can be made 1 week ahead. Store tightly covered at room temperature. 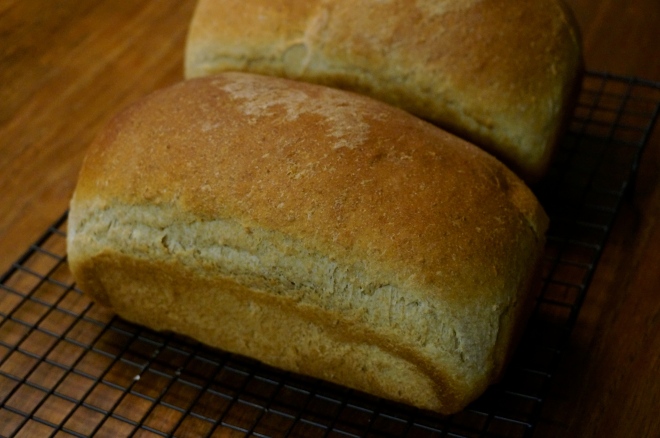 I really should be starting to post recipes featuring apples and pears and the first winter squashes of the season. I have been furiously bookmarking recipes with seasonal ingredients, anxious to try them out. But in fact, I have done absolutely no cooking for a whole week now. Nada. Zero. That’s because last Friday I had arthroscopic hip surgery to repair a torn labrum and a hip impingement. So, I’ve been hobbling around on crutches, unable to carry anything, let alone stand long enough to cook. Not to mention that for the first few days I was on some serious painkillers that kept me too loopy to be near sharp knives and hot stoves.

The good news is that I’m recovering well and, fingers crossed, when I see the doctor on Monday, he will say I can stop using crutches. At which point, I will be thanking Steve for taking such good care of me by making cherry scones and passion fruit ice cream.

In all seriousness, though, I hate not being able to cook. It’s not just the relaxation it provides or the fact that I know what we are eating (as opposed to take-out food). It’s that it gives me a sense of power that I don’t feel anywhere else. When I am in the kitchen, I am in control. I take decisions and act on them. I make things, physical things, with my own two hands. I’ve been really missing that this week.

So, instead of a recipe for french apple cake or roasted squash with dates and thyme (both of which should be appearing here soon), I give you a recipe for a loaf of bread on the healthier side of things. Let me start by saying that I am not a huge fan of whole wheat breads. I definitely do not like the ones you find in the supermarket that proudly call themselves whole wheat, with big letters, but a closer look at the ingredients reveals high fructose corn syrup, “natural” flavors, and a bunch of other, not so “whole” things. But I also don’t really like homemade whole wheat breads either. I find them too dense, too bitter, and a chore to eat.

This recipe, however, is one I quite enjoyed. It uses oats, sugar, honey, and cinnamon to make the bread lighter and a little sweeter. If you can find King Arthur’s White Whole Wheat Flour (a whole wheat flour that is lighter than the traditional kind), the bread comes out soft and bouncy, more like a white loaf, but with the benefits of a whole wheat bread. If you can only find regular whole wheat flour, go ahead and use that. It will be just as good.

In a large mixing bowl, combine the water, oats, maple or brown sugar, honey, butter, salt, and cinnamon. Let cool to lukewarm, about 10 to 15 minutes.

Add the yeast and flours, stirring to form a rough dough. Knead (about 10 minutes by hand, 5 to 7 minutes by machine) until the dough is smooth and satiny.

Cover the pans with lightly greased plastic wrap and allow the loaves to rise until they’ve crowned about 1″ over the rim of the pan, about 60 to 90 minutes. Preheat the oven to 350°F.

Bake the loaves in the preheated 350°F oven for 35 to 40 minutes, tenting them lightly with aluminum foil after 25 minutes, to prevent over-browning. Remove them from the oven when they’re golden brown, and the interior registers 190°F on a digital thermometer.

Turn the loaves out onto a rack to cool. Store at room temperature, well-wrapped, for several days; freeze for longer storage. 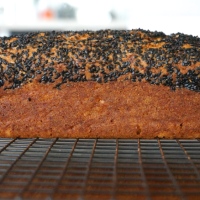 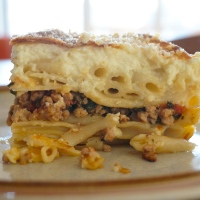